KOTA KINABALU: Police yesterday delivered food relief to several villages in Pitas by air, as land connections were cut off due to floods.

More food is expected to be delivered today, depending on the weather as it is still raining in some places.

The Borneo Post yesterday reported that a collapsed bridge, landslides and floods in the district disrupted land transport to the town, leaving thousands stranded, many of them with limited food supplies.

Sabah Community Development and People’s Well-Being Minister Shahelmey Yahya who is scheduled to make a trip to the affected areas this morning (Jan 16) will be getting more information about the situation at the Pitas Disaster Operation Controlling Centre (PKOB).

“The helicopter has landed at SK Liu, SK Malubang, SMK Telaga and SK Maringgan in the morning bringing food baskets.

“We are preparing more food and will be channeling it to the affected villagers as soon as possible.

“I will be getting information from Pitas PKOB about the situation there, and how can we mobilise aid to those affected,” he said when contacted yesterday.

It was confirmed by a villager in Kampung Liu that food baskets had arrived and some of the village community members will be arranging the distributions.

The writer was also contacted by villagers in Pandan and Dandun area that they are still trapped as the main road at Blok 18 is still flooded and impassable.

Nellmond Ojon from Kampung Kobon in Pandan said many small villages in the area cannot go out to get food and medical supplies.

He hopes that assistance could arrive as soon as possible.

“I believe many in Pandan are experiencing the same, but our village is the most difficult place to reach. Just imagine, on normal sunny days we have to walk to the mainroad for hours to get transport so that we can go to Pitas town.

“As of today, we have never received any assistance. As usual,” he said. 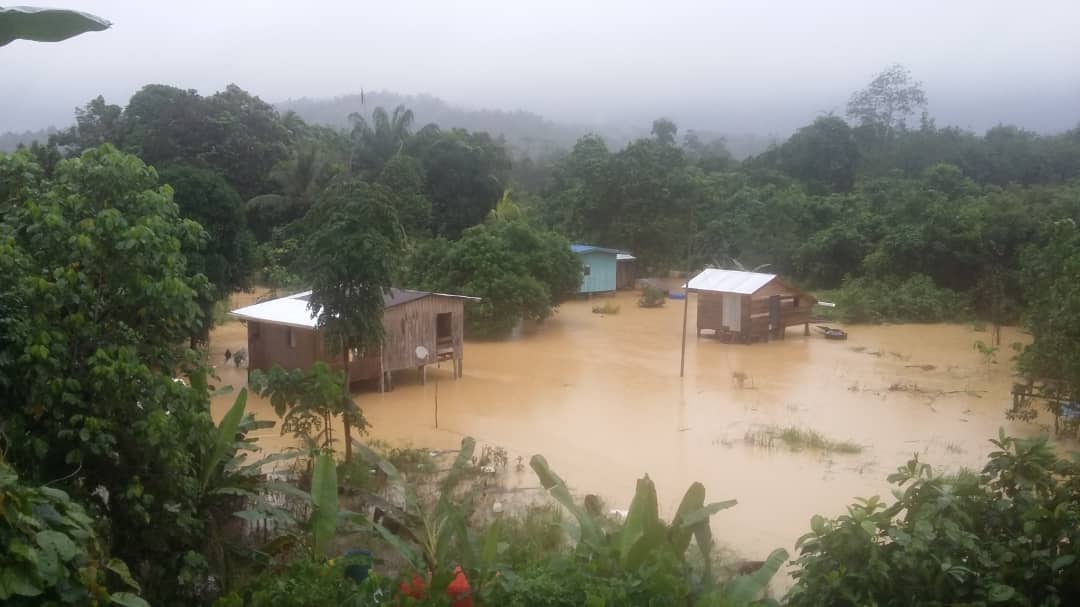 Noel Sangkong, another victim from Kabatasan also informed the writer that the damaged road going to the area has affected the livelihood of people in four other small villages namely Kampung Ladap, Gambir, Kiambalang and Kinago.

“These four villages were disconnected since January 11, and there is no way to reach us at the moment because most of the people here are staying near Sungai Javi-Javi, a river connected to Sungai Bengkoka.

“We were told that food aid is coming so we already prepared ‘rakit’ (rafts) to transport the goods, if any, because about 300 people need immediate food supplies at the moment. Since the network connection is bad, we only managed to contact people from outside today.

“No electricity in Kampung Gambir and Kiambalang since January 11 because many SESB electricity poles were crushed by trees, so we charged our mobile phone using dried batteries,” he said when contacted yesterday.

A raft was prepared in Kampung Gambir near Kabatasan on standby to transport food relief, if any.

Noel further explained that the situation in the four villages will not improve as long as the level of Sungai Bengkoka is high.

As of 7 pm yesterday, there was no heavy rain in most areas in Pitas, but the floods are not receding in most connecting roads, making it difficult for the people there to get food supplies.

‘No doubt’ US has undercounted Covid deaths: Fauci

Longhouse in Betong placed under EMCO from May 7-20