Flood water from the lower lying ground looming near the Desa Wira Lorong 5i Multipurpose Hall evacuation centre this afternoon.

But the flood got worse last night with the water level inside the hall rose up to thigh level, he added.

“The women and children had to huddle together to sleep on the stage which is about three foot high, while we men had to stay up to keep watch, not that we could lie down and sleep as there was no more dry space left,” he said when met by The Borneo Post at the evacuation centre today.

While many areas around Desa Wira were still flooded, the water level had subsided a little amid the light rain, and several evacuees were seen sweeping the wet floor of the multipurpose hall to remove the puddles.

Nicholas said while waiting for the flood to subside, they had nowhere else to go but the Lorong 5i evacuation centre as directed by the authorities.

“I hope the authorities could at least find a better place as our evacuation centre,” he added.

Desa Wira Lorong 5i Neighbourhood Watch (KRT) chairman Jugah Jantum said the water level at the area began rising around 10pm last night, and the water level got as high as thigh deep around midnight.

“We had to move some evacuees, especially the children and women up the stage which is about three feet high. Some of them are disabled (OKU) and it is tough for them,” he added.

Jugah said many of them only have the clothes on their back since they were evacuated on Jan 13, as their other clothes got wet due to the flood.

The non-stop rain and flooded evacuation centre did not help, making them unable to dry their clothes or store their valuables properly there.

“Everything valuable we have to cram into the stage together with the people when the hall was flooded,” he said. 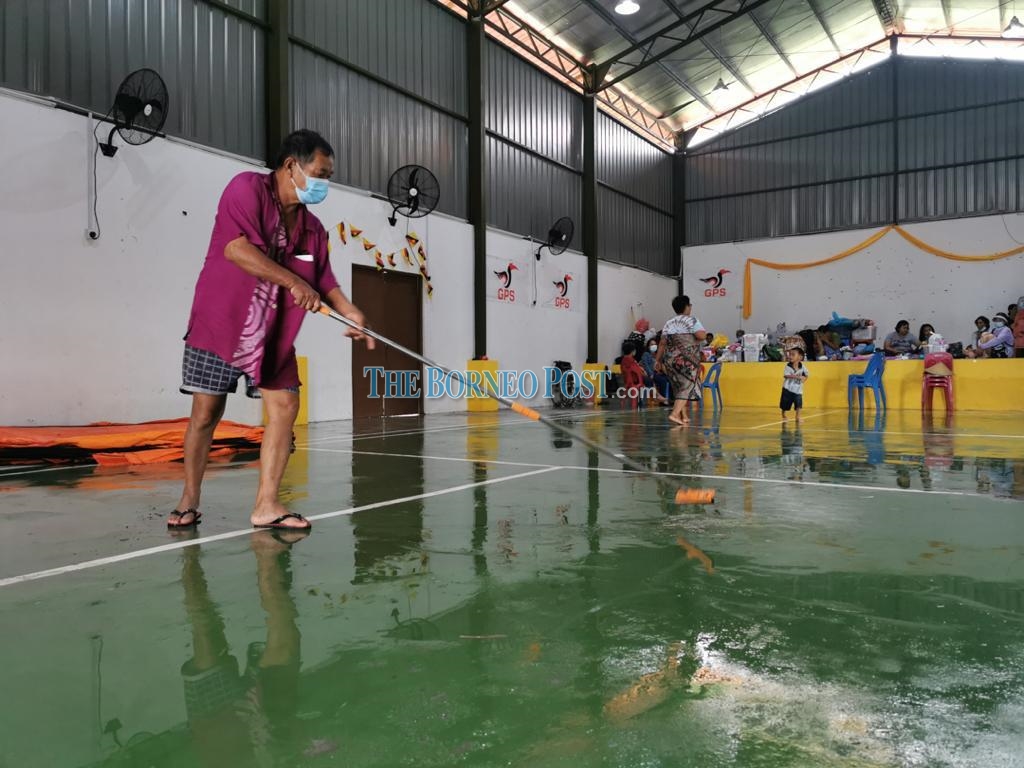 An evacuee sweeping the wet floor of the evacuation centre.

On top of that, with the Covid-19 pandemic still rampaging, Jugah said it was impossible to observe physical distancing.

“Some people from the Health Department came yesterday and reminded us to observe physical distancing. How can we do that if we have to huddle together on the stage away from the flood water?” he said.

Meanwhile, Kattylia Ayai who was busy preparing dinner with other women for the evacuees, said the authorities must find a solution to their problems because there are those who are disabled (OKU), young children and babies among the evacuees.

“Many of us lost a lot of valuables in the flood. We only have the clothes on our back,” she said.

Kattylia was evacuated with her parents and her brother’s extended family during the wee hours on Jan 13.

“At the time the water in the house rose up to about waist deep. We lost many valuables, I cannot say how much. We lost our food supplies and rice, the refrigerator, and other things.

“I went there myself yesterday evening. The relevant authorities are reviewing and will do what is necessary,” he said when contracted.

It was also reported that the Malihah Multipurpose Community Hall temporary evacuation centre was flooded up to the ankle level this morning, prompting the authorities to transfer some 209 evacuees to another evacuation centre at SJK Chung Hua Sungai Tengah.

Civil Defense Force (APM) Sarawak director Mohtar Samat told Bernama that this was the first time the hall was flooded since it was used as an evacuation centre.

“This hall had been used as an evacuation centre many times before, but this time it is posing a challenge to the evacuees and agencies involved including APM, Fire and Rescue Department (Bomba), Rela Corp and the Community Welfare Department in finding a new evacuation centre,” he said.